Skip to content
Microsoft AI Classroom series is an initiative by Microsoft in association with NASSCOM FutureSkills® and supported by GitHub to skill up students and future developers on new technologies || https://www.microsoft.com/en-in/campaign/microsoftAIforstudents/ ||
Click Here

How to Use NVIDIA GPU Accelerated Libraries

In: Data Science Update
With: 0 Comments

How to Use NVIDIA GPU Accelerated Libraries for AI

If you are working on an AI project, then it’s time to take advantage of NVIDIA GPU accelerated libraries if you aren’t doing so already. It wasn’t until the late 2000s when AI projects became viable with the assistance of neural networks trained by GPUs to drastically speed up the process. Since that time, NVIDIA has been creating some of the best GPUs for deep learning, allowing GPU accelerated libraries to become a popular choice for AI projects.

If you are wondering how you can take advantage of NVIDIA GPU accelerated libraries for your AI projects, this guide will help answer questions and get you started on the right path.

Why Use NVIDIA GPU Accelerated Libraries For AI? 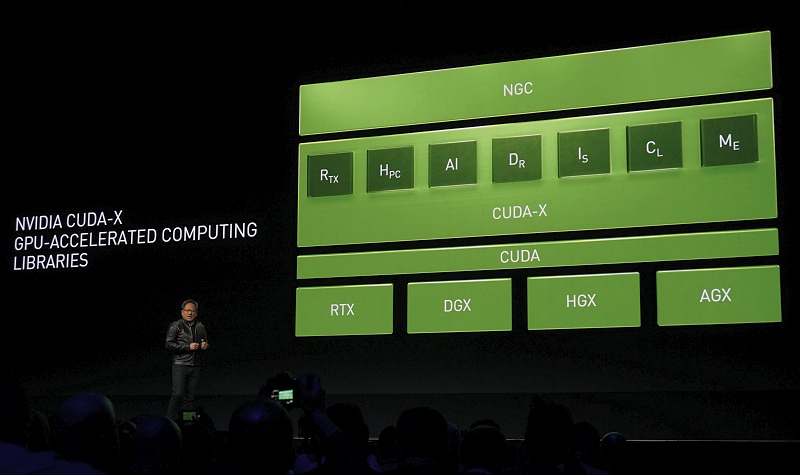 When it comes to AI or, more broadly, machine learning, using GPU accelerated libraries is a great option. GPUs have significantly higher numbers of cores with plenty of memory bandwidth. This allows the GPU to perform parallel processing at high speeds – a must for the majority of machine learning projects.

Using GPUs for AI and deep learning has become the norm for incredibly complex mathematical matrices needing to be parsed. The parallel processing power of NVIDIA GPUs allow them to effortlessly break down these matrices. Taking advantage of GPU accelerated libraries for your next AI project will ultimately be the quickest and most efficient solution.

In the end, a CPU can be used for operating neural networks for deep learning projects, but they simply cannot outpace GPU accelerated libraries.

Which NVIDIA GPU is Best For AI? 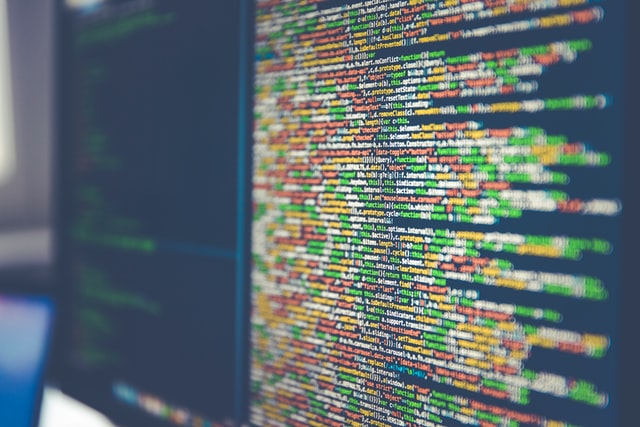 To keep it simple, the best GPU for graphic rendering will typically be the best GPU for AI projects. However, the GPU will need to be a powerful one. The more processing capabilities of the GPU, the more parsing a neural network can do.

Realistically, there are a few factors to keep in mind when selecting an NVIDIA GPU:

While this is a basic factor, it may well be one of the most important factors. If your GPU isn’t compatible with the rest of your PC setup, then it was all for nothing. Double check and triple check to make sure the GPU you purchase fits within your PC’s requirements. 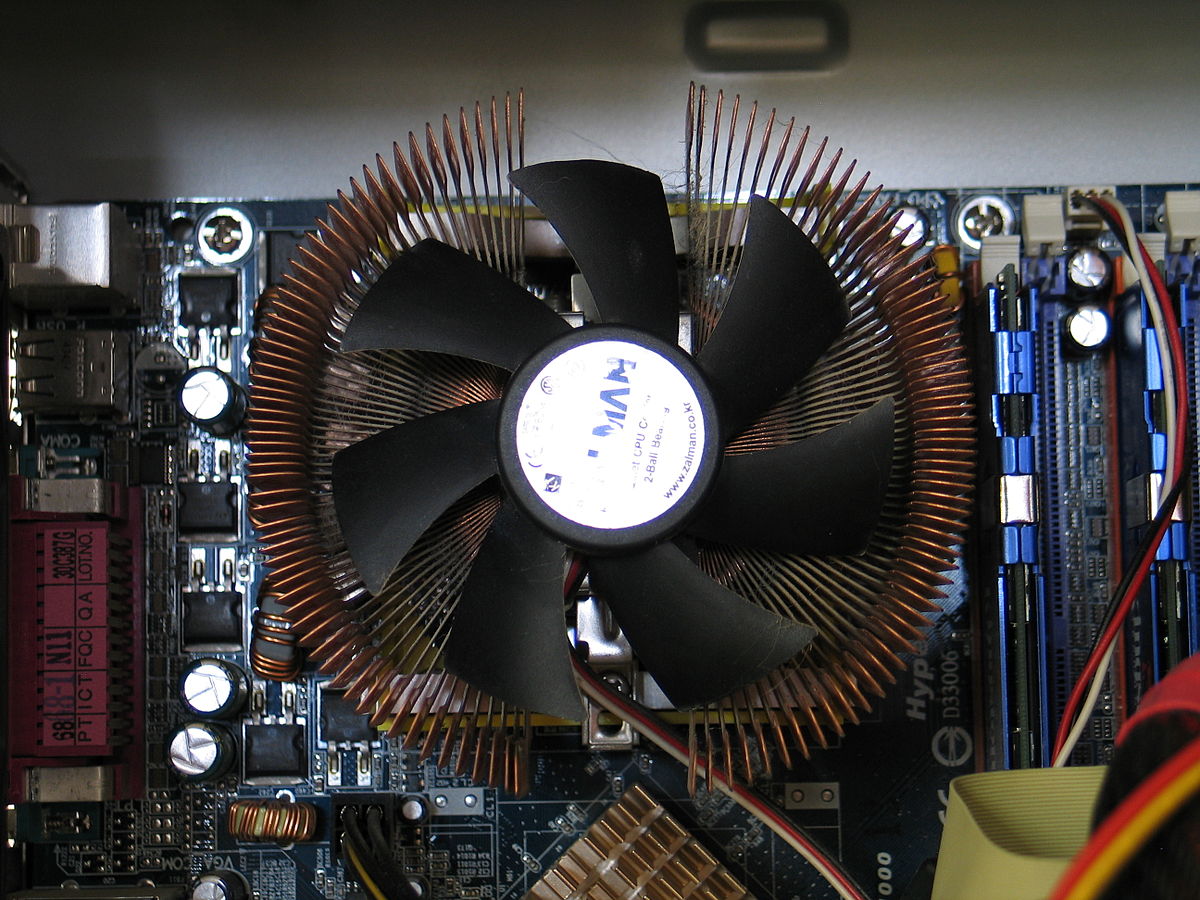 GPUs can become hot with all the data processing happening. The TDP Value indicated by the manufacturer will let you know what the safe range should be. In many cases, a cooling system will be needed to reduce the heat and increase performance.

A neural network can include a massive amount of data that needs to be processed and stored (if only temporarily). You will need a GPU with a decent memory capacity to run as smoothly as possible. 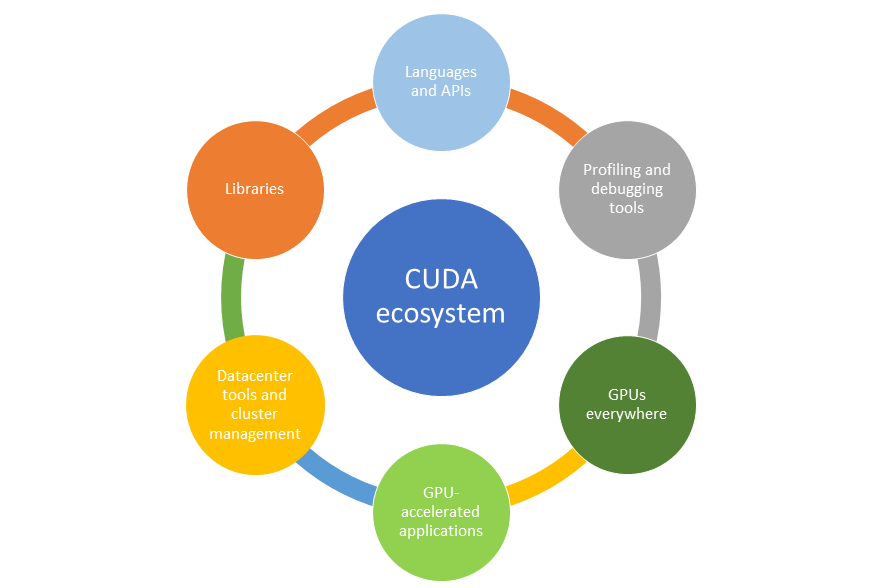 CUDA is the parallel computing platform designed by NVIDIA. It is the industry standard for machine learning, deep learning, and AI. The more CUDA cores, the higher the processing capabilities.

What GPUs To Use For Artificial Intelligence (AI)? 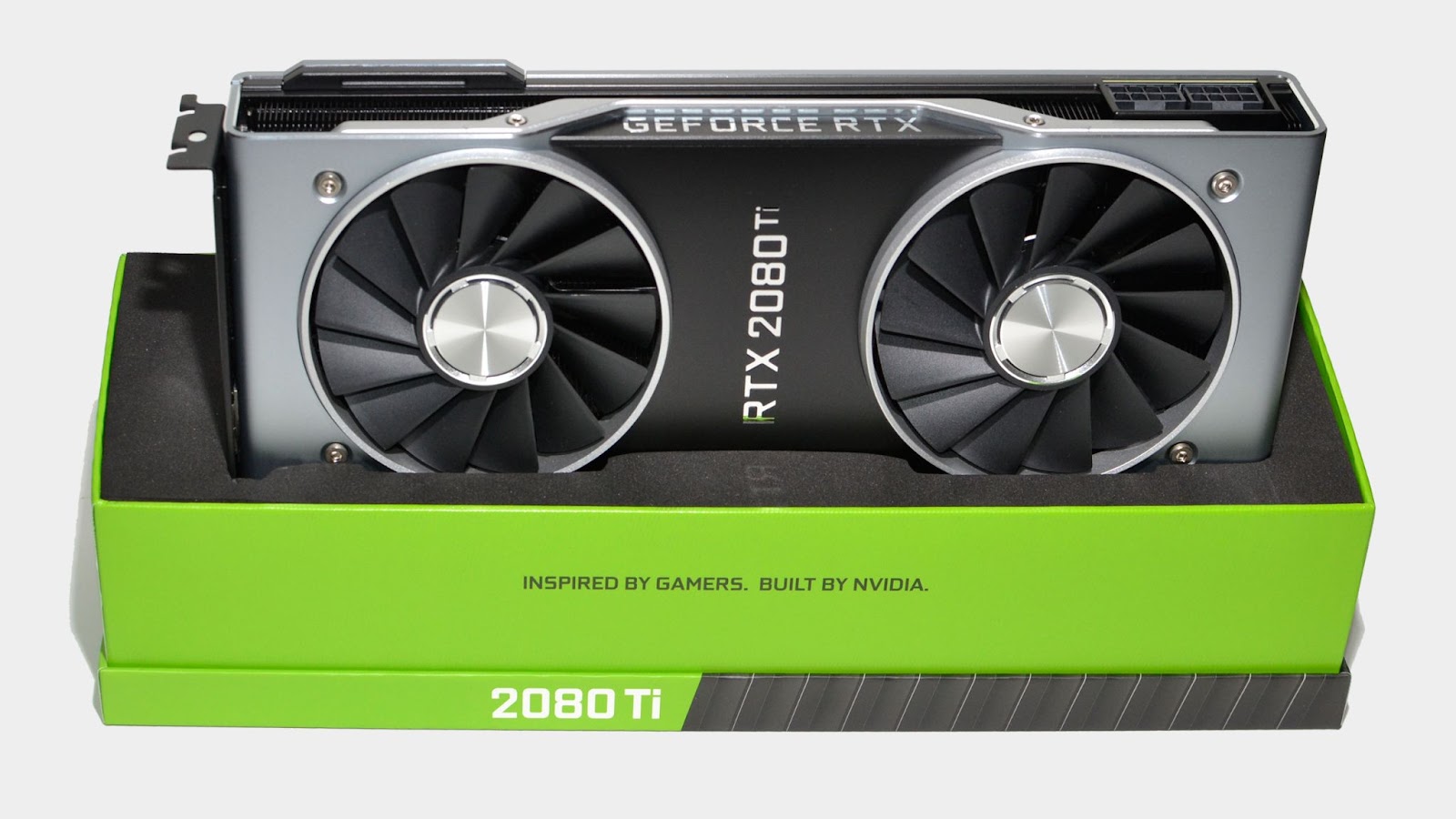 To give you an idea of what to look for in a NVIDIA GPU, we highly recommend the GeForce RTX 2080 Ti Founders Edition. This GPU over-delivers at every benchmark! Although it’s not the newest GPU from NVIDIA and has only half the CUDA cores that the RTX 3080 Ti boasts, the price is significantly less making it a great entry level GPU. However, if you can afford the newer GPU and it will fit in your PC configuration, then definitely go with the newer model!

In terms of compatibility, it is a little wider and longer than some other GPUs, and the TDP Value is 260 W, making it a little higher than standard GPUs.

It has plenty of memory with 11BG and 616 GB/s memory bandwidth and the CUDA boasts a whopping 4352 cores. There is a lot of parallel processing power packed into the RTX 2080 Ti Founders Edition GPU.

What Are the Different Types of NVIDIA GPU Accelerated Libraries? 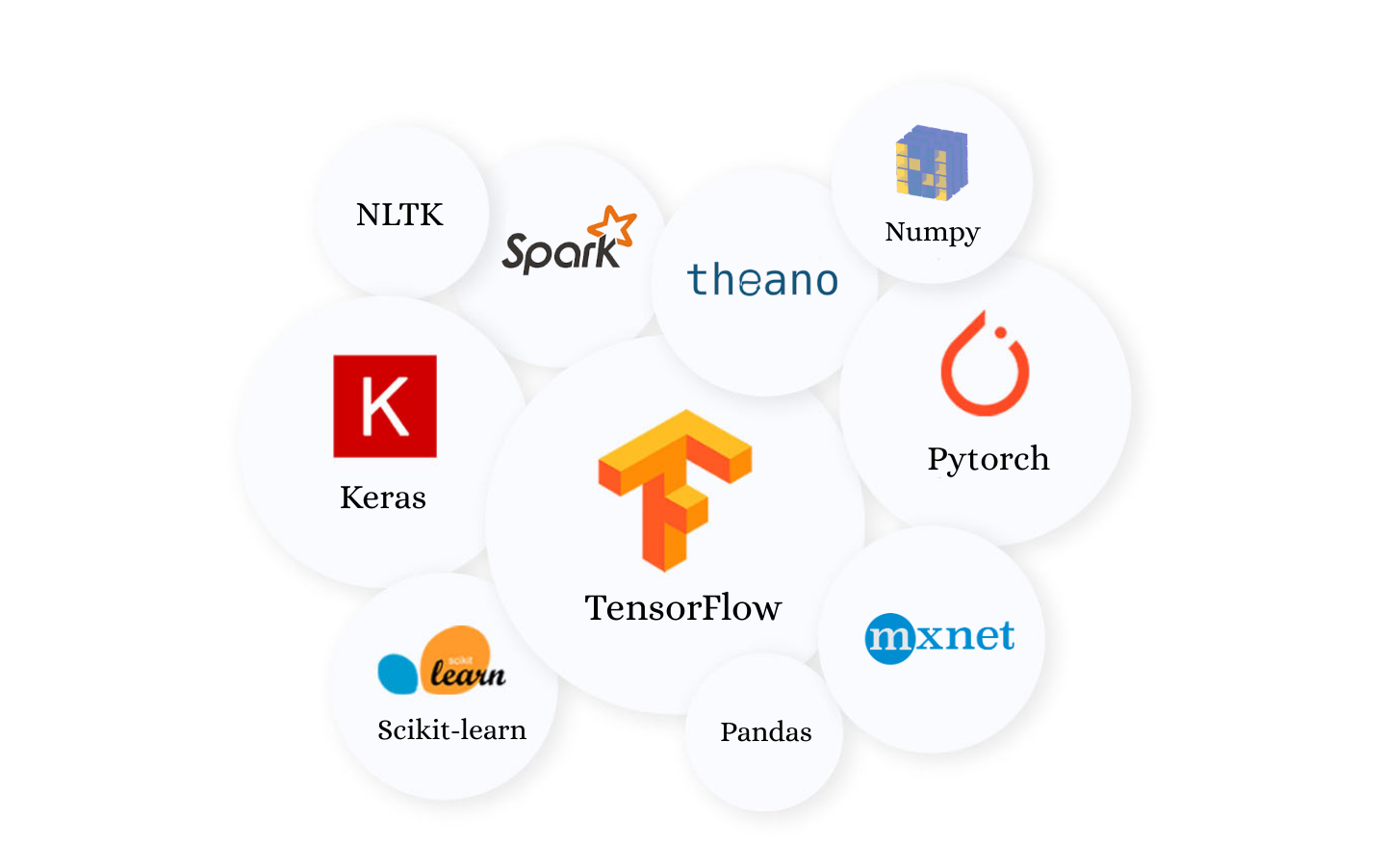 NVIDIA has released CUDA-X which is the same as CUDA, mentioned above, but with drastically higher performance. The GPU accelerated libraries that are accessible with CUDA-X range from High Performance Computing (HPC) to AI and everything in between.

NVIDIA says it best when talking about their GPU accelerated libraries:

NVIDIA® CUDA-X, built on top of NVIDIA CUDA®, is a collection of libraries, tools, and technologies that deliver dramatically higher performance—compared to CPU-only alternatives— across multiple application domains, from artificial intelligence (AI) to high performance computing (HPC)…Libraries provide highly-optimized algorithms and functions you can incorporate into your new or existing applications…Many of the GPU-accelerated libraries are designed to very easily replace existing CPU libraries, minimizing the impacts on existing code.

Here are six NVIDIA GPU accelerated libraries you can incorporate into your deep learning or AI projects.

When you are using high performance computing for complex or intensive mathematics, then taking advantage of GPU accelerated libraries can be incredibly useful. These Math Libraries can be used to build basic, intermediate, and complex algorithms and equations into your project, which can be useful for chemistry, medical imaging, fluid dynamics, seismic exploration, and a whole host of other popular use cases.

The following is a list of current Math Libraries:

How to Use NVIDIA Math Libraries?

This collection of standard mathematical computations and functions are easy to add to your source code by using “#include math.h” and are even easier to install. NVIDIA has a great quick start guide to help you get started.

Parallel Algorithm Libraries are efficient algorithms for generating graphs and studying relationships between data points for complicated data. These libraries are great options for various observable sciences, logistics, and any other projects that require drawing conclusions on high quantities of data points.

How to Use NVIDIA Parallel Algorithm Libraries

If you are studying relationships between data points in C++ operations, then NVIDIA Parallel Algorithm Libraries are perfect, high-efficiency solutions for your data structure needs.

The following is the Parallel Algorithm Library that is currently available:

NVIDIA has a quick start guide to get you started with using the Parallel Algorithm sequences provided by Thrust.

If you are working on a deep learning or AI project that will be interpreting visual data, then Image and Video Libraries are going to be a vital aspect of your project. These libraries are used to decode image and video so it can be processed, re-encoded, and utilized by various programs, including neural networks.

The following are the Image and Video Libraries that are currently available:

How to Use NVIDIA Image and Video Libraries

To leverage your GPU with CUDA processing power NVIDIA has plenty of libraries to choose from. These libraries provide for all your image and video decoding, encoding, and processing projects.

To dive in with Image and Video Libraries you can explore nvJPEG documents to get started.

These libraries can have a little bit more niche use, but Communication Libraries are a great example of what GPU accelerated libraries can do. They optimize the ability of multiple GPUs to talk to one another, dramatically increasing the speed, performance, and efficacy of your other NVIDIA libraries.

The following are the Communication Libraries that are currently available:

How to Use NVIDIA Communication Libraries

If you are utilizing multiple GPUs, then these libraries will optimize functions across all your GPUs and multi-node communications.

If you want to explore more about these Communication Libraries, then check out this NVSHMEM documentation.

Now, for this article, deep learning Libraries are the most important library being discussed. These libraries leverage CUDA for optimal use and performance while also taking advantage of some of the more specialized components of GPUs. Doing this allows for optimal flexibility between parallel processing and runtime.

The majority of deep learning Libraries used for AI projects will employ multiple other libraries to perform all the functions required within the neural network you are creating.

The following are the Deep Learning Libraries that are currently available:

How to Use NVIDIA Deep Learning Libraries

From real-time streaming of analytics to optimization these GPU accelerated libraries for deep learning are designed to utilize CUDA and the specifics of your hardware in your GPUs for the best neural network performance possible.

Look over this NVIDIA DALI documentation to familiarize yourself with the possible deliverables of these deep learning Libraries.

These are open source libraries that NVIDIA has incorporated into CUDA and CUDA-X to expand the usefulness and adaptability of NVIDIA GPU accelerated libraries. Partner Libraries give you more options and ability to get the best results out of your deep learning or AI projects.

The following are the Partner Libraries that are currently available:

How to Use NVIDIA Partner Libraries

These Partner Libraries offer the flexibility of open-source projects with the power behind CUDA, giving you the best options for your projects.

The list of available Partner Libraries is ever-expanding, so be sure to check out the growing list here and find the perfect partner library for your specific project and needs!

Get More Helpful Insights in Other Articles

Which GPU accelerated libraries would be the best fit for your deep learning, machine learning, AI, or other projects? Is there anything we missed that you wish we had covered? We want to help you make the best decision possible, so please reach out to us!

You can find other articles elsewhere on the SabrePC blog. Keep a lookout for more helpful articles that will be on the way soon. If you have any questions or want to suggest some other topics for us to focus on, please feel free to contact us.